Making Lemonade out of Lemons: Winter Workschoppe and the Unexpected Benefits of a Blizzard

No, scratch that – it all started because I was disappointed.

Like many sacred musicians, I’d been having a particularly challenging year, and amid the Omicron surge, my church had recently canceled all in-person rehearsals and returned to online worship. For weeks, I had looked forward to Area 1’s Winter Workshop as my one opportunity to finally make live music with bell friends. And then, two days before we would have all met in Amherst, an impending blizzard forced the event to cancel.

Canceling Winter Workshop was absolutely a wise decision. There is no scenario under which it would have been safe for anyone to travel in the face of the forecast for that Saturday. But this fact did little to allay my discouragement. At another time, I might have welcomed being snowed in at home, but during this January, I’d already had all the downtime I could take and then some. I was ready to be social and to make music!

At that moment, I saw a discouraged Facebook post from Chuck Arnold – and it hit me that I wasn’t the only disappointed ringer who suddenly had a free Friday evening. I live in Andover, MA, and there are a number of bronze-level ringers within 30 miles of me who had been registered for Winter Workshop. Since no snow was due to fall until very late on Friday night, I began to wonder whether some of us could get together on Friday afternoon, whether just to hang out or to ring through some of the music we’d learned for Winter Workshop. A quick glance at the bell assignment list for the Distinctly New England track from Winter Workshop showed me that it would be easy to fill a 5-octave choir with local ringers. We still needed bells and a location, so I emailed a few local directors whose churches (unlike mine) were not closed, and Sue Lee quickly responded, offering us the use of her equipment and space at St. Matthew’s in Acton.

From there, things picked up speed quickly. When I first responded to Chuck’s Facebook post, I had imagined we’d just amass a few ringers who lived in the Merrimack Valley, but 60+ Facebook comments later, it turned out that ringers from throughout New England wanted to join us in Acton. Soon, I had received emails from ringers in 5 out of the 6 New England states, it was clear that we could field a second full choir, and I had reached out to various other ringers to bring more equipment. Big shout-out here to Susan Capestro, Emlee Kohler, Carlene Ruesenberg, Susan Schultz, and Gina Williams, who all helped supply equipment for the second choir! One ringer dubbed the new event “Winter Workschoppe,” and the name stuck – but while the pun on my last name was apt, there were certainly a LOT of people now invested in pulling off this Friday-night adventure!

And that’s about the point when I received an email from Dan Moore, asking “What if David Harris were to show up?” Apparently, David was already in Rhode Island visiting his family and was eager to join us. I was stunned. Our actual clinician for Winter Workshop, all the way from North Carolina, was going to conduct this rogue event!

In the end, 26 of us spent three hours ringing under David Harris’s direction. David more than lived up to his reputation, and kept us fully, eagerly engaged throughout the time. And since we had all already learned the music for Winter Workshop, and nearly everyone was ringing their originally-assigned positions, we were making music of a fairly high caliber! Two members of Sue’s church served as the “audience” for our final concert, we ordered pizza, and Sue provided salad and brownies. 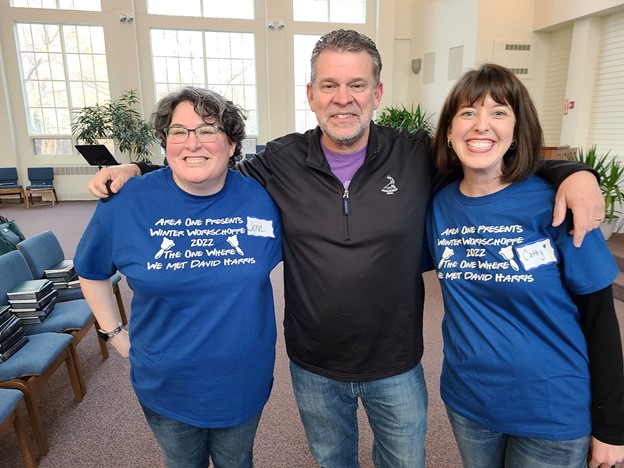 So what are the takeaways from this Winter Workschoppe, besides just bragging that we pulled it off? Most importantly, it was a great reminder of the flexibility and determination that “bell people” routinely display. And this has set some other ideas in motion. With the comment, “If we can get David Harris to Winter Workschoppe on 36 hours’ notice, what CAN’T we do?”, Jennifer Stack created a Facebook group called “Randomly Bronze” as “a place to make pickup or planned events happen.” If you’re not yet a member of this group and are interested in causal opportunities to ring bronze-level repertoire more often, you should join! They’ve already held a rep reading event in New Hampshire in February, and are fielding a “bronze orphan” choir for MA Spring Ring on April 2. I’m excited and proud that Winter Workschoppe may have sparked extra opportunities for music-making. As David Harris said to us on that Friday evening, “This could only have happened in Area 1!” Go team! 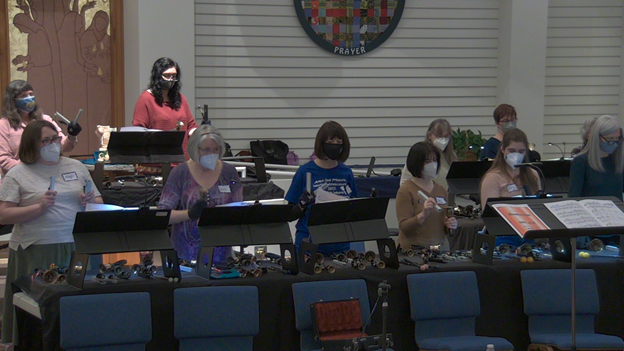